Rod Stewart or the Green Brigade? Rod. Every. Time. 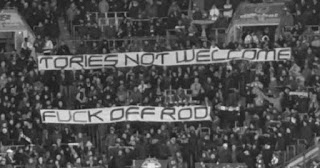 With their banner yesterday the Green Brigade showed us their true colours, and they’re not green.

Rod Stewart has been a Celtic supporter for over 40 years and never misses an opportunity to promote the club at home and abroad. He has supported Celtic through thick and thin and while that doesn’t put him above criticism, it should afford him the respect from Celtic fans not to have that message on a banner from the Green Brigade. He and his children should he able to come into Celtic Park without being greeted with a banner telling him to f*** off.

Rod’s thoughtcrime was to post a message congratulating Boris Johnson on winning the election and the student Union politicians of the Green Brigade saw their favourite colour - red - and swung into action.

I couldn’t care less what the Green Brigade’s politics are. They can support any political cause they like as far as I’m concerned, but my problem with them is that they not only use Celtic as a platform for those views, they also insist that they are being “real” Celtic fans by doing so. That they are being true to the ethos of Celtic by behaving like late 1940’s Soviet commissars purging Eastern Europe of “fascism.” And everyone must agree with them, or they’re “not welcome” at the club either.

In actual fact, Celtic’s ethos has never been political. Celtic was founded by devout Catholics for charitable purposes. The Green Brigade and their comrades like to tell us that means our founders were socialists like them. That the founding of Celtic was a political act. Which is ahistorical nonsense.

To read the first circular released by Celtic in January 1888 is to see it was a profoundly Catholic initiative. Founded by the laymen of three Catholic missions; first patron the Archbishop of Glasgow and the clergy of the missions. Founded to raise money for the Poor Children’s Dinner Table and the St Vincent de Paul Society.
It places great stress on the need to provide sports facilities for “our Catholic young men.” Indeed, the word “Irish,” is mentioned nowhere.

The Celtic Football & Athletic Club was founded for purely charitable purposes and had no political aims at all. Our founders were a mixed bag - the Marist Brothers Walfrid and Dorotheus, the Liberal John Glass, the Fenian Pat Welsh, and the Tory monarchist Willie Maley who allowed the British Army to recruit at Celtic Park during WWI. Individually they had political beliefs of course, but the only thing that united them was their Catholic faith. Institutionally, Celtic was neither Republican nor socialist. It was charitable.

Which brings us to the entryists of the Green Brigade, who are to Celtic what Momentum is to the Labour Party. Take a look at their self-aggrandising website http://www.greenbrigade.co.uk/history/

They saved Celtic Park don’t you know? We were in decline. The atmosphere was rotten, till these “ultras,” came along and Made Celtic Park Great Again. But they’re not simply a crowd of boys who want to bring a bit of atmosphere with non-stop singing and dancing. It’s their stated intent to politicise the Celtic support and they’re distorting our history to claim they’re living the ethos of the club.

“With a few early meetings in Glasgow pubs discussing the dire state of the Celtic support, Ultra culture and influence, the role of politics within football and how all are or could be linked with supporting Celtic the Green Brigade was founded.”

Do you get that? The Celtic support was “dire” till these arrogant neds came along to save us. And there’s that intent to politicise supporting Celtic.

It can’t be denied the Green Brigade contribute a great deal to the colour and noise at Celtic Park, but they are rapidly becoming, if they are not already, more bother than they are worth. With their repeated, persistent refusal to follow the same rules the rest of us are expected to; with their political displays and pyros that would see any other Celtic supporter banned for life from the stadium and are costing Celtic hundreds of thousands of pounds in UEFA times, they need reining in by the club and if that means dispersing them around the stadium, so be it. If they don’t like it, they know where the door is.

Not only are they costing the club financial and reputational damage, they bring nothing good that is irreplaceable to the party. No doubt their apologists will point to the annual food bank collections and the charidee money they raise for Palestinian causes. But like everything else they do, they do it for themselves. Anyone can donate to a food bank; you don’t need to give it to the Green Brigade to hand it over. But every time they are criticised they’ll put out a pathetic statement refusing to acknowledge any fault and pointing to the charidee work and food bank collections they do. Al Capone ran soup kitchens for the homeless in 1930’s Chicago - does that mean despite all the racketeering, extortion and murder he was actually a great guy really?

Football is only of secondary importance at best to the Green Brigade. They have hijacked Celtic to amplify their political posturing and their politics is way more important to them than their support for Celtic. They proved that by their pathetic banner attacking Rod Stewart. Doesn’t matter that Rod is a Celtic fan. All that matters to them is that he is a thought criminal who apparently likes the Tories.

It’s not even enough for the Green Brigade to use our stadium as a giant soapbox, they viciously attack anyone who doesn’t share their politics and that should concern us all. Rod Stewart will be alright in the directors’ box with his minders. What about the ordinary Celtic fan who is guilty of thoughtcrimes against socialism? Who’s going to protect him if word gets out he votes the wrong way?

The Green Brigade are bringing trouble and division to the Celtic support with their petty, self-indulgent posturing. They are repeatedly costing the club money in UEFA fines which will eventually lead to stand closures and have no intention of stopping. Now they are turning on a high-profile and long-standing Celtic fan who has done more for Celtic than they ever will.

They’re not walking in the footsteps of the founders of Celtic. They’re not living out the ethos of our club. Brother Walfrid, John Glass, Willie Maley, Jimmy McGrory, Jock Stein - they would all have been appalled by that banner on Sunday and by the very idea a section of self-proclaimed uber-fans are are politicising the Celtic experience, treating the club as their support act rather than the main show and abusing anyone who doesn’t meet with their approval.

If this is to become a battle for the heart and soul of Celtic, I know whose side I’m on. And it’s not the Green Brigade’s. 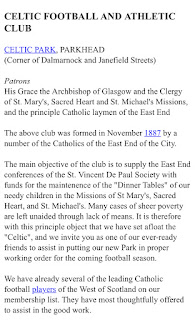 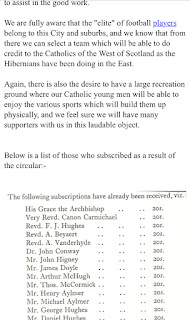