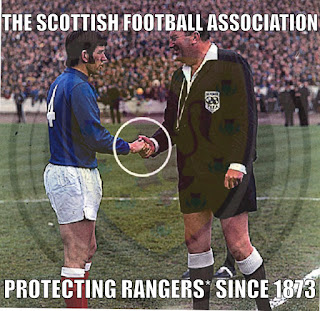 News has broken today that referee John Beaton has been on the receiving end of death threats following his performance in last week’s Glasgow derby at Ibrox. This is a shocking development if true, and the people making those death threats need to be found and prosecuted to the full force of the law. Nothing excuses behaviour like that (again I stress, if true).


It wouldn’t be the first time referees have reported death threats of course and these are always greeted with an outpouring of sympathy for the poor, honest official, his life threatened just for doing his job. It tends to obscure the very real concerns about the performance of his job, as hand-wringing pundits plead with the thuggish element behind the threats to get some perspective, because it is only a game after all, and we wouldn’t have a game at all if it wasn’t for honest, impartial, courageous referees like John Beaton.


What must be borne in mind is that the death threats (if real) and the performance of John Beaton last Saturday are two separate things. Let’s agree there can be no excusing any threats made against him but this story must not be allowed to derail the moves to hold Beaton accountable for his brazen favouring of Rangers* in last week’s match.


Pundits and commentators will now be told to tone down the rhetoric because it will allegedly only feed the alleged bloodlust against Beaton. What this means is, let’s accept Beaton is as honest as the day is long and move on.


Beaton must still be held to account for the series of bizarre decisions he made in last week’s match, all of which implausibly favoured Rangers*. If anyone is to blame for the death threats (other than the people allegedly making them), I accuse the Rangers Protection Racket that is the Scottish Football Association.


The SFA, amongst many other uniquely bizarre practices, makes no effort to ensure impartiality in refereeing. They are aided in this by the faux-outrage amongst the Scottish football writers’ fraternity at the merest suggestion referees might be at all biased. Honest Mistakes is the name of the game and how dare we question the impartiality of the fine upstanding chaps who go on to make a living on the after-dinner speakers’ circuit telling assorted Rangers Supporters’ clubs, Freemasons and Orangemen about how they damn well made sure Celtic never won a match they refereed.


How dare we question the impartiality of referees who send sectarian emails about the Pope over the SFA computer system.


How dare we question the impartiality of former (and some say current) Rangers season ticket holders as they take charge of a Glasgow derby and make a series of bizarre decisions that somehow always favour Rangers*.


It is at least possible that these guys are capable of being impartial, but is it likely? I know if I was refereeing the match last weekend there would have been a very different outcome, no matter how poorly Celtic performed on the day. Rangers* would have been down to 10 men after 5 minutes, but the difference would be, no one would be able to see they didn’t deserve to be, because Morelos kicked Scott Brown in the balls.


The situation was reversed though. Morelos kicked Scott Brown in the balls and a Rangers*-supporting referee decided against even awarding a freekick to Celtic. That cannot be right.


There’s a story from Roman history of Julius Caesar and his wife Pompeia.


As well as being at different times a Consul of Rome and eventually dictator, quite early in his career Caesar was chosen to the lifetime position of Pontifex Maximus, or “Supreme Bridge Builder.” This was the High Priest of the Roman state religion.


In her position as wife of the Pontifex Maximus, in 62BC Pompeia hosted the festival of Bona Dea, or “the Good Goddess,” which was held in the official residence of the Pontifex Maximus on the Via Sacra in Rome. It was a female-only event, but a young Patrician, Publius Clodius Pulcher, disguised himself as a woman and gained entrance, supposedly to seduce Pompeia.


Publius was discovered and fled without ever coming face-to-face with Pompeia, but was caught and put on trial for the sacrilege of tricking his way into a female-only religious celebration.


Caesar gave no evidence against Publius at his trial and he was acquitted of the charge, but in the aftermath, Caesar divorced his wife. When asked why, he responded that, “My wife ought not to be even under suspicion.”


This has given rise to the proverb, “Caesar’s wife must be above suspicion.” There was no proof that Pompeia had ever had any improper relations with Publius. There was no proof she even wanted Publius to be in the building. But for Caesar, that was not good enough. The very fact that there was a whiff of suspicion surrounding Pompeia was enough for him to divorce her. His dignity demanded no less.


Referees are, or should be, in a similar position to Pompeia. They quite simply must be above suspicion.


The FA in England take this view. Referees need to declare which team they support and they are never allowed to referee games affecting those teams. By doing this, the FA are not saying they don’t trust those referees to be impartial, they are protecting the integrity of the game by placing referees above suspicion.


Referees still make mistakes, but in England at least, we can accept that these are honest. I was at the Manchester City v Crystal Palace match a couple of weeks ago and at one point in the first half a Palace defender headed the ball past his own goal and the referee awarded a goal kick, to howls of outrage from the City fans.


A few minutes later, he awarded City a corner kick, to be met with ironic cheers by the City fans. From the corner, the ball was again headed out by a Palace defender and more ironic cheers greeted the corner award. This time, the referee theatrically took a bow to the City fans. Laughter greeted this and the incorrect goal kick award was forgotten about. The bow came across as an acknowledgement from the referee that he’d made a mistake and the fans accepted it.


It’s inconceivable to me that a similar thing could happen in Scotland; certainly not in a match involving Rangers*.


The SFA insist on appointing referees to Celtic and Rangers* matches who have more than a whiff of suspicion about them. They must take a share of the responsibility when fans perceive referees’ decisions to be blatantly, and game-changingly in favour of the team they support.


The usual objection to bringing in the rule that referees must declare which team they support is that it wouldn’t be possible to have referees who don’t support either Celtic or Rangers* in Scotland.


That to me, in this day and age, is no objection at all. It would be the easiest thing in the world to bring referees up from England or Wales for the day. They could fly in from London, Cardiff, Birmingham or Manchester in less than an hour, and be back home before tea-time.


The reason the SFA won’t do it is that it would be an admission of their own long-term failure to ensure that not only are match officials in Scotland impartial, they can also be seen to be impartial.


Referees must be above suspicion and referees in Scotland are most certainly not above suspicion. The blame for that lies squarely with the Scottish Football Association.
Posted by Daniel O'Connell at 07:28